People talk about working with the Land Bank

Candy maker: ‘Land Bank did all the legwork’
For 92 years, Dayton’s iconic candy maker, Esther Price Candies, has been turning opportunities into sweet successes. Its recent experience with the Land Bank is no different.

For years, company officials had wanted to provide a secure parking lot for employees at the Wayne Avenue production and retail facility. And then the ideal situation developed right across the street, as ownership of four distressed parcels – mostly abandoned, tax delinquent or scheduled for demolition by the Land Bank – began to transition.

“What we didn’t know was how to navigate the legal process for acquiring the properties,” said Peggy Weaver, controller for Esther Price.

After starting to research the next steps on her own, Peggy learned the company could turn to the Montgomery County Land Bank for help. The Land Bank worked through a year-long process to acquire the properties, demolishing two residences that were blighted. The four lots were then sold to the company at fair market price.

As owners, Esther Price officials are now making plans to provide their workers parking in a visible, fenced and landscaped lot. The neighborhood is free of the eyesores, and the community will benefit from the property taxes being paid.

“The Land Bank did all the legwork,” said Peggy. “Susan (Considine) knew the process like the back of her hand. She explained every step and how long each one would take.

“We had a wonderful experience working with the Land Bank.”

Land Bank helps city turn eyesore into asset
An abandoned car wash had become far too prominent a feature in the landscape of West Carrollton’s City Center District. Occupying nearly four acres in the middle of town, Sonny’s Auto Spa was an eyesore with environmental problems and an uncertain future.

A previous owner had sold the property to aspiring entrepreneurs but still held the mortgage. The buyers, unable make a go of the car-wash business, abandoned the property after having failed to pay the taxes over several years.

Then the owner learned of Kettering Health Network’s interest in the site for a medical facility and was eager to donate it for this worthwhile reuse. But tax liens and environmental issues presented extraordinary complications.

City of West Carrollton officials, who had worked on several other successful projects with the Land Bank, asked the agency to get involved to help facilitate a successful resolution – which is exactly what happened. The Land Bank was able to accept the donation from the original owner, eliminating environmental liabilities for future landholders.

The Land Bank then turned the property over to the city for demolition and environmental remediation, while KHN resolved the tax liens.

“We appreciate the partnership by the Land Bank to help clean up a property that had become an eyesore in our community,” said Mike Lucking, economic development director.

The city has since turned the land over to KHN, which, over time, plans to build a medical office building featuring physician practices and outpatient services.

The deed to his own home made Charles ‘the happiest man ever’
Charles, a lifelong Dayton resident, had his heart set on spending his “Golden Years” living in a home of his own. In fact, the retired Dayton public school teacher, who is handicapped and gets around with a walker, had his eye on the ideal house in the Blairwood neighborhood. It was a one-story brick home with three bedrooms and a ramp to the front porch. It also was tax-delinquent, the owner having died several years ago and his family claiming no interest in the house.

A friend suggested that Charles check with the Land Bank about acquiring the property. “It took two years for it to go through the foreclosure process properly,” the 72-year old said. “But when Susie (Crabill) delivered the deed, I was the happiest man ever. I felt like a huge weight had been lifted off my back.”

Property turned into a showpiece
The city of West Carrollton recently cut the ribbon on a newly renovated home that months earlier had been a tax-delinquent neighborhood nuisance – and a source of citizen complaints. Although the house was essentially unlivable inside, it was structurally sound and located in a neighborhood with average home values of $145,000.

City officials were proactive. They decided to fix up the house rather than stand by and allow it to drag down neighborhood property values. They turned to the Land Bank for help and secured a $50,000 loan from the Residential Rehab Loan Program.

With the Land Bank’s assistance, and the city’s additional investment of $42,000, West Carrollton transformed the property into a showpiece that sold for $168,500 its first day on the market – a significant boost for the property values in the neighborhood.

Before and after home | West Carrollton Residential Rehab Loan

Before and after kitchen | West Carrollton Residential Rehab Loan

Before and after living room | West Carrollton Residential Rehab Loan

Demolition: Land Bank an ‘unbelievable tool’
“When we first started working with the Land Bank, Harrison Township was facing serious decline in some of our neighborhoods. Fort McKinley overall was headed for deep, deep trouble, and we were seeing an increasing number of vacant homes and nuisance properties in other areas, as well. Of course these problems attract more problems, like crime and falling property values. Our trustees had made demolition a priority, but the need was always greater than our budget. The Land Bank is helping us change that. The grant funds we’re getting through them will pay for nearly 60 nuisance properties to be demolished. Fort McKinley is turning around. Later this year, we’ll be applying for a Land Bank planning grant to create a strategic plan for Phase II of improvements in that neighborhood. The Land Bank is a tool that’s viable, realistic and has already had impact. It’s been an unbelievable tool for us.” 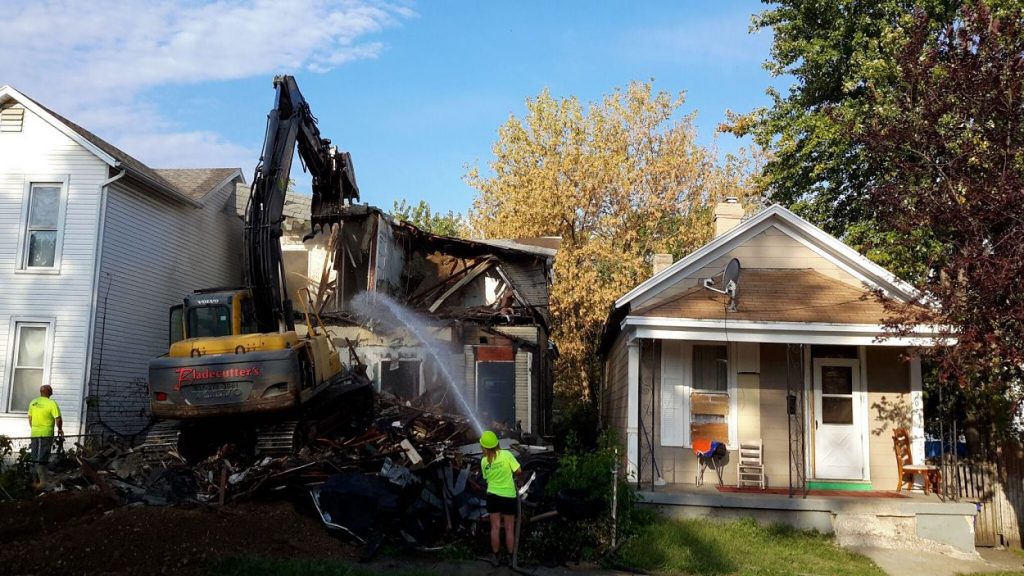 Foreclosure Acquisition: ‘They saved me quite a bit of money’
“When I bought my house 20 years ago, I signed off without doing a survey – and it came back to bite me. When I went to the bank to refinance my house at a lower interest rate, I found out that half my property was owned by me, and the other half was still owned by the deceased previous owner. It turns out the two parcels were never combined. The only way to correct the problem would have been to hire an attorney and get a ‘quiet’ title. But then I went to the Land Bank. They were able to get a foreclosure on the property that was not in my name, and they put it in my name. They were professional and competent through the whole process. They kept me informed. In the end, I was able to get my refinancing. They saved me a ton of money.”

DIY Renovation: ‘If you’re willing to put in the work on a foreclosure, it’s a great opportunity’
“I had had my eye on a property for some time. It wasn’t in great shape — kids had kicked in the doors and 16 windows – but I saw the potential. When I researched it, I found out the Land Bank owned it, and it was on their demolition list. I met with Sue at the Land Bank, and she laid out how we could work together. She said I would need to rehab it to make it 100 percent safe and 100 percent livable before she could give me the deed. It was a little intimidating as I was doing the work and investing in new floors, windows and massive amounts of yard work without owning it. But Sue eased my mind. I ended up with a very nice house. The county is collecting the taxes. No one is dumping trash, and the township doesn’t have to pay someone to come and mow. It’s a win-win-win all the way around.” 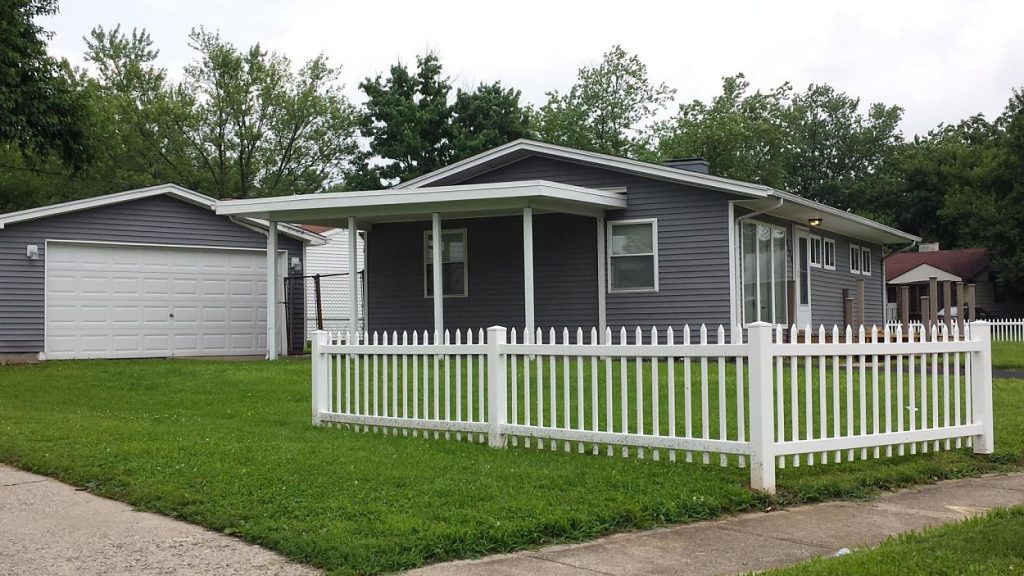 DIY Renovation: ‘Like working with family’
“Four or five years ago, I got interested in a property adjacent to another one I own. The property was abandoned and vacant, and no one was paying the taxes on it. So I started a foreclosure with the Montgomery County prosecuting attorney, but the owner just went ahead and deeded it to the Land Bank. Then the prosecuting attorney told me it was on a demolition list. So I worked with the Land Bank, and they were able to have it deeded to me, on the condition I’d rehab it. As I was doing the work, my wife was concerned about the unsecured investment, but I was confident. Working with the people at the Land Bank was like working with family. They’re professional, and they’re doing a great service cleaning up neighborhoods. Now I have good tenants in both properties. In the end, I made a 100 percent return on my investment.”

‘A lot of tools jurisdictions can’t muster’
“We’ve been working with the Land Bank since its inception. Since then, we’ve had roughly 300 problem properties dispositioned in a variety of ways – including both rehab and demolition. Many times, the neighbors come out to say ‘thanks’ when they see the bulldozers roll up for a demolition. The City has also received a planning grant that we will use to leverage a $2 million ask from HUD to undertake a major planning activity just west of downtown. The Land Bank has a lot of tools jurisdictions can’t muster.”